To read this article in the Independent Record online, click here. 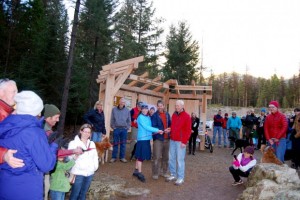 WHITEFISH – The Montana Land Board unanimously approved a pair of transactions that create permanent public access to the Whitefish Trail and state trust lands surrounding Whitefish Lake, while contributing more than $10 million in revenue to school trust beneficiaries.

The approved recreation easement totals approximately 1,520 acres and allows expansion of the Whitefish Trail project – a proposed 55-mile trail system on state trust lands in Whitefish. The easement was proposed by the city of Whitefish and the nonprofit group, Whitefish Legacy Partners, and will provides permanent public access to the easement area and retire development rights.

The easement was approved at a full-market value of $7.3 million, with Whitefish Legacy Partners providing funding through community donations and corporate sponsors.

The Land Board also approved a separate land banking transaction totaling 580 acres, which was proposed by philanthropist Michael Goguen, who donated $3 million to the trail project in 2008. Goguen owns Two Bear Properties of Whitefish and will grant a public recreation easement to the city for a new two-mile stretch of public trail on his property. The deal was approved at a market-value cost of approximately $2.9 million.

Goguen said his role in the Whitefish Trail project has been rewarding, particularly as the plan comes to fruition.

“Not only will these deals create a legacy of permanent public access and outstanding recreational trails, they also provide Montana’s schools and universities with over $10 million in much needed revenue,” he said. “It’s not every day that I can take part in a project with so many worthy goals rolled into one – protecting scenic vistas, abundant wildlife, healthy forests and pristine water, while creating a world-class trail system and supporting education.”

“This is a landmark project for Whitefish and the state of Montana culminating from over a decade of collaboration,” Muhlfeld said. “Obviously, we wouldn’t be here if it wasn’t for the generous donations from the Goguen family to the community of Whitefish and the commitment from the DNRC (Department of Natural Resources and Conservation) to get this deal wrapped up. I think it’s a win-win for the city of Whitefish, and also, most importantly, for the trust beneficiaries. The city of Whitefish will continue to work diligently with the DNRC to make sure we maximize trust revenue while protecting the values that are part of this easement transaction.”

The two proposals benefit the Montana school trust and are a continuation of the Whitefish School Trust Lands Neighborhood Plan, which was approved by the Land Board in 2004.

Since then, the Whitefish Legacy Partners and the Goguen family have successfully worked with the DNRC on several projects outlined in the Whitefish School Trust Lands Neighborhood Plan, including the Whitefish Trail and a 2008 land exchange that helped catalyze the project.

The Whitefish Trail is currently a loop trail system consisting of 22 miles of buff, singletrack trails located around the city. Eventually, it will encircle Whitefish Lake and the greater Whitefish area, connecting Whitefish Mountain Resort on Big Mountain and the city’s paved trail system.

Local representatives delivered a letter of support of the project to Gov. Brian Schweitzer and Montana Land Board representatives on Monday. The letter, signed by more than 200 community members, including every member of the Whitefish City Council, asked the state’s top officials to “support the continued work to secure permanent public access to these important open forest lands, to generate revenue for Montana’s school trust, and to build and grow the recreation amenities that are the backbone of the local and state tourism economies.”

Anderson, who also is a Whitefish Legacy Partners board member, said the community’s support for the project is evidence that the lands are being well-managed.

“As managers of our state trust lands, the Land Board has the job of managing these lands as public lands while at the same time providing critical funding to higher education in Montana. With this in mind, the city of Whitefish and Whitefish Legacy Partners proposed these transactions to align closely with those purposes,” he said.

Whitefish Legacy Partners chair Lin Akey said the city of Whitefish will hold the easement and no tax dollars were used in the funding.

“What most folks don’t know is this is bonus money for schools and children, as these lands will continue as working forests and will continue to provide revenue from traditional sources,” Akey said. “It’s a win-win for all.”