To read this article in the Ravalli Republic online, click here. 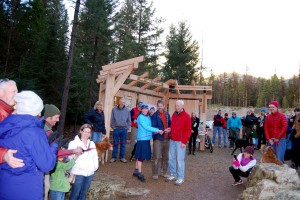 WHITEFISH – Conserving state, federal and private lands for public recreation is like a puzzle of interlocking pieces, and in Whitefish those pieces continue dropping into place.

Last week, the complete picture came into sharper focus when the Whitefish Legacy Partners unveiled a brand-new three-mile section of its sprawling Whitefish Trail project – a 55-mile system of buff singletrack that wanders through state trust lands around Whitefish. The three miles of newly opened trail are in the Swift Creek floodplain north of town, and bring the total number of completed trail miles to 22.

“Right now, this is kind of an outpost,” project manager Greg Gunderson said of the new section, which does not yet connect to the existing trail system. “But over the next two years, we’ll be working really hard to make connections both to Big Mountain and Beaver Lakes,” where additional trail already exists.

A kiosk at the Swift Creek trailhead was milled out of local larch, and the new trail runs past Smith Lake, which next year Montana Fish, Wildlife and Parks will begin stocking with trout for a family fishing pond.

Another step toward fulfilling the master plan occurred Nov. 5 when the city council, in a vote hailed as a milestone for Whitefish land conservation, unanimously approved a deed of public recreation use easement that creates permanent public access to 1,520 acres of state lands around Whitefish Lake, as well as to the Whitefish Trail.

The deed is still subject to approval by the Montana Land Board, which is slated to review the proposal in Helena on Monday, and will secure and protect state trust land in the Beaver and Skyles lakes area, where a dozen miles of existing trail have been cut.

The deed to secure the trail corridor would be managed by the city, and part of the transaction includes purchasing development rights of school trust land totaling about $7 million. As the nonprofit thrust of the project, Whitefish Legacy Partners has been working to raise the money to purchase the easement.

The singletrack trail system links state, federal and private lands, and once finished, will form a loop around Whitefish Lake. A trail easement allows two miles of the trail to pass through property owned by local philanthropist and venture capitalist Michael Goguen, who in 2008 donated $3 million to the trail project.

If the land board approves the deal, Goguen will purchase 580 acres and grant a public recreation easement to the city for a new section of trail. The city approved the easement Nov. 5.

The multi-partner effort to assemble the puzzle has required cooperation from numerous groups, including state and federal agencies that recognize how conservation, recreation and natural resource development can coincide.

“This is a huge step,” Heidi Van Everen, executive director of the Legacy Partners, said at a ribbon-cutting ceremony for the Swift Creek section. “This moves us forward in shaping a paradigm shift that will show the state Land Board how we can support recreation and compatible forestry. That has drawn skepticism in the past, but we’re showing that the two can coexist.”

Those efforts began in 2003, as development swept across the Flathead Valley and the Department of Natural Resources and Conservation turned an eye toward real estate proposals for school trust lands in Whitefish.

Some of that land had existing, user-built trail networks on it, and the prospect of losing prime recreation land to development worried members of the Whitefish community, who took their concerns to the Land Board.

In response, the Land Board chartered the 2004 Whitefish Area Trust Land Advisory Committee, which consisted of numerous stakeholders, including the DNRC.

The committee drafted the Whitefish Area Trust Lands Neighborhood Plan and over the next year brainstormed possible uses for the land, eventually settling on the creation of a permanent public recreation corridor.

The plan seeks out the best ways to manage and protect the lands while providing revenue for schools, and WLP formed to demonstrate that outdoor recreation could be both an environmentally sound and financially productive use of land.

“Our goal has been to continue gaining momentum every year, raising money and building new trails for the public,” Van Everen said, adding that the 16-foot trail corridor is a small but prominent piece of the puzzle. “We’ve been able to show the DNRC that we are serious about making this dream a reality.”